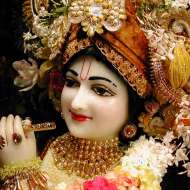 Bhaktisiddhanta Sarasvati Thakura (born Bimala Prasad Datt, in Jaganath Puri, Orissa, on 6th Feb 1874-1 January 1937) was the spiritual master of his Divine Grace A.C Bhaktivedanta Swami Srila Prabhupada, the founder Acharya of ISKCON. He spread the teachings of Chaitanya Mahaprabhu in the early twentieth century. When he was born, his umbilical cord was wrapped around him exactly as a Brahmana thread. His Father Bhaktivinoda Thakura could see that the pure message of Lord Caitanya Maha Prabhu was degraded by human society who were after advancement of civilization by technology and sense gratification. They were misinterpreting, misrepresenting the purest gift by Lord Chaitanya. So Bhaktivinoda Thakura used to pray sincerely to Lord Caitanya to send one of his eternal associate to this earth to reestablish Lord Caitanya Mahaprabhu’s mission

When Bhaktivinoda Thakur’s son was 6 month old, the Ratha Yatra was coming and Lord Jagannath’s cart stopped right in front of his house, without moving, however people tried to pull. His Srimathi Bhagwati Devi decided to take her child for the darshan of the Lord and climbed the ladder to top of the cart, when they reached the front of beautiful deity of Jaganath the child reached out and took the dust of the feet of Jaganath upon his head, and at that moment a garland fell off from Lord Jaganath and encircled the child. Srila Bhakti Vinoda Thakur was confirmed that his child was the fulfillment of his prayers to Supreme Personality of God head.

Bhaktisiddhanta Sarasvati Thakura was a brilliant kid. When he was 7 year itself he memorized every shloka of Bhagavad Gita and can give commentary. He was a topper in his academics. He was brilliant in Mathematics, Sanskrit, Philosophy and he was considered the greatest of astrologers. In fact, while he was at college, he used to read every book in philosophy and religion from the library and had every one of them memorized. Sometimes he was called as “The Living Encyclopedia” for his vast knowledge. He was given the thulasi japa mala to chant Hare Krishna Mahamantra by his father at 13 years old. The Vaishnava calendar with all of the dates of previous Acharya’s- appearance, disappearances and all the dates of festivals of the great incarnations of Lord Krishna was produced by Bhakti Siddhanta Saraswati. His initiated Spiritual master was Srila Gaura Kishore Das Babaji who really wished that this mass of our body of flesh and blood may be sacrificed at the altar of preaching the Samkirtan Movement (congregational chanting of the Holy Name of Godhead) propagated by Lord Chaitanya. Srila BhaktiSiddhanta Thakur took this as his mission to spread the holy name of the Lord.

Srila BhaktiSiddhanta Sarasvati was called as the LION GURU for his fearless and powerful delivery of Vaishnava siddhanta. He was such a powerful and bold preacher. He was against the Mayavadi Philosophy and was against the casteism and any philosophical deviation from Gaudiya Vaishnavism. According to our scriptures Varnashram system is based on one’s guna and karma. According to qualities you have your perform particular occupation but in those days people believed that only if you are fortunate due to pious activities of previous birth you will be born in a Brahmana family and only such a birth can make you glorious and worthy of the spiritual world or to speak the Vedas and no one else should touch the Vedas. Lord Chaitanya has explained clearly that whether if you are a sanyasi or a Sudra doesn’t matter. If you know the science of Krishna, you can be guru for the whole world. Everyone has that power, if they just hear the message sincerely, repeat it and live by those principles of being accepted as a Brahmana – and more than a Brahmana, being accepted as a pure devotee of the Lord. Srila Bhaktisiddhanta Sarasvati was trying his best to propagate Lord Chaitanya’s mission.

Srila Bhaktisiddhanta Sarasvatī Gosvami Maharaja recommended that if one has money, instead of constructing costly temples, one should spend his money for the publication of authorized books in different languages for propagating the Krishna consciousness movement. He used to say that “This press propaganda, the publication propaganda, is bṛhad-mṛdaṅga. If we beat the Mrdanga, and chant Hare Krishna Mahamantra may be people can hear from few yards. But the books if distributed, it can go from country to country, from continent to continent, actually it is so happening. And so many millions of people who are really suffering in this material world are getting an opportunity by this to become pure, to chant, and to know Krishna.

Srila Bhaktisiddhanta Sarasvati established the Bhagavat Press in South Calcutta. He also printed a daily spiritual newspapers. When people asked him why he want to publish a newspaper like this then he used to say “if an insignificant city can produce 5 daily newspapers, then why can’t we publish a newspaper every second about the eternal, ever-fresh transcendental activities of the Supreme Personality of God head in his unlimited spiritual planet, Goloka Vrdavana. He published many authorized sastras like: Bhagavad-Gita, Srimad Bhagavatam, Caitanya-caritamrta etc. He predicted that foreigners would learn Bengali to relish the nectar left by Srila Krishna Dasa Kaviraja in the Caitanya-caritamrta (The best example we could think of HH Jayapataka Swami Maharaja composing the lyrics Yadi Prabupada Na Hotie….).

Srila Bhaktisiddhata Sarasvati always tried to bring harmony in the society by providing spiritual upliftment to all by trying to spread the Lord Chaitanya’s message by lecturing, preaching daiva varnashram dharma (performing duties of varnashram along with activities of pure devotional service), writing and participating in debates within India like different places in Bengal and places in Tamil Nadu (Madras, Tirupati, Kanchipura etc.) and abroad. His strong preaching gave him a reputation that his very name would strike a terror in the hearts of his philosophical adversaries. The other cults who was doing nonsense preaching were doomed forever in the presence of Bhaktisiddhanta Sarasvati. He even face several hardships, the so-called Brahmana shopkeepers would close their shops and refuse to sell provisions to him. But he was adamant in his mission. He always emphasized the needlessness of material qualifications to receive spiritual life. Anyone, regardless of caste, sex, nationality, past background, etc., who was sincere to have spiritual life, he would give it to them. He used to give this spiritual education to the illiterate masses by pictorial representations by means of dioramas and dolls in life-like manner. These wonderful exhibitions attracted thousands of people.

Srila Bhaktisiddhanta Saraswati Thakur, practiced severe austerities, he took a vow to chant 1 billion names of Krisha, and for 9 years he remained in Mayapur chanting 192 round every day until he finally completed his vow. Now for us for chanting 16 rounds itself sometimes we are struggling to stay focused, and chant without any offence. He used to do the catur masya vrata. He will sleep on the ground without any pillow, and cook some kichadi everyday with his own hands. He would put it on the ground with no plate or thali. He did this for 9 years. In Bengal there are floods during monsoons. The roof would leak and he would sit with an umbrella in his hut, loudly chanting the holy names – Hare Krishna Hare Krishna Krishna Krishna Hare Hare, Hare Rama Hare Rama Rama Rama Hare Hare.

By Hare Krishna Temple Of Austin

Experience Vrindavan in Austin this Janamashtami

Programs for your whole family

Learn more about how Hare Krishna Temple of Austin is spreading the message of Krishna and helping families become more Krishna Conscious through our very popular monthly newsletter - Sharanagati.

Ways you can donate